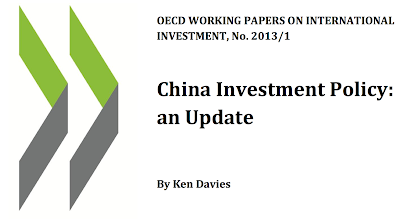 The Organisation for Economic Co-operation and Development (OECD) has just published China Investment Policy: an Update in the series OECD Working Papers on International Investment by Ken Davies.

Here is a brief summary of the Update and a link you can click on to download the complete book as a free PDF.

The first part of the update shows how FDI inflows to China have changed in size and significance. The last part of the update uses previously unavailable official Chinese sources to sketch a picture of the different experiences and policies of various parts of China in promoting investment abroad.

China remains the largest recipient of FDI among developing countries and FDI continues to play a disproportionately large role in promoting China's trade, investment and tax revenue generation, albeit not as large as before, as is shown in the charts in the first part of the Update.

A number of structural changes occurred in recent years, including a slight revival of equity joint ventures, faster growth in services-sector FDI than in manufacturing, and a reorientation from the Eastern Region to the Central and Western Regions. In addition, China has been rapidly becoming an important source of outward foreign direct investment (OFDI), a trend that was reinforced by the global financial and economic crisis.

While foreign investor confidence is maintained by China's economic strength, it is being undermined by rising labour costs and shortages of skilled labour and by greater competition (especially from Chinese companies). In addition, there are fears that an investment protectionist trend may be emerging in China, as evidenced by, for example, perceived discrimination against foreign-owned companies in government procurement.

The Chinese government has taken a number of measures to streamline and decentralise FDI administration and strengthen enforcement. The emphasis has been on aligning inward FDI flows more closely with national priorities, including upgrading industrial sophistication, supporting innovation, setting up outsourcing industries and developing poorer hinterland regions. The most important change is the threefold raising of the ceiling on provincial examination and approval authority over foreign investment projects in the "permitted catalogue". Merger notification discrimination against foreign investors has been removed and a national security review process for cross-border M&As has been announced. The Chinese government should continue its efforts to liberalise and increase the transparency and predictability of the framework for both inward and outward FDI.

Sourcing of outward FDI in China remains very unevenly distributed, with coastal cities and provinces responsible for the overwhelming majority of OFDI stock and inland provinces exporting little or no capital. Provincial-level government policies towards outward FDI remain far less transparent than corresponding policies towards inward FDI or indeed than the central government's "go global" policy. This is not necessarily deliberate: clearly there is a much stronger incentive to publicise inward investment policies as part of a province's investment promotion effort.

The limited information shows that provinces are developing a differentiated strategy based on economic and locational factors. Some common features are starting to emerge in those provinces and major cities that have more, and more developed, outward FDI, including a preference for co-ordinated outward investment by firms, for example by joint outward investment promotion and by clustering in special economic zones established in host countries.

Greater transparency at central government level would help allay host country suspicions regarding the intentions of China's outward-investing enterprises and hence sustain the success of the "go global" policy. This could start with collecting and publishing more and better OFDI data.

A rich fund of OFDI experience is being accumulated by the provinces. A comparative analysis of the strengths and weaknesses of these policies could be an important boost to policy development. Provinces themselves can also benefit from greater transparency concerning OFDI statistics and policies, in particular their encouragement to outward-investing enterprises to comply with international norms of responsible business conduct.

If you are interested in participating in research on China's outward investment policies, please feel free to contact me directly at kendavies@growingcapacity.com.

Visit my sister blogs, Growing Capacity and The man in the check shirt.
Follow @Chinability